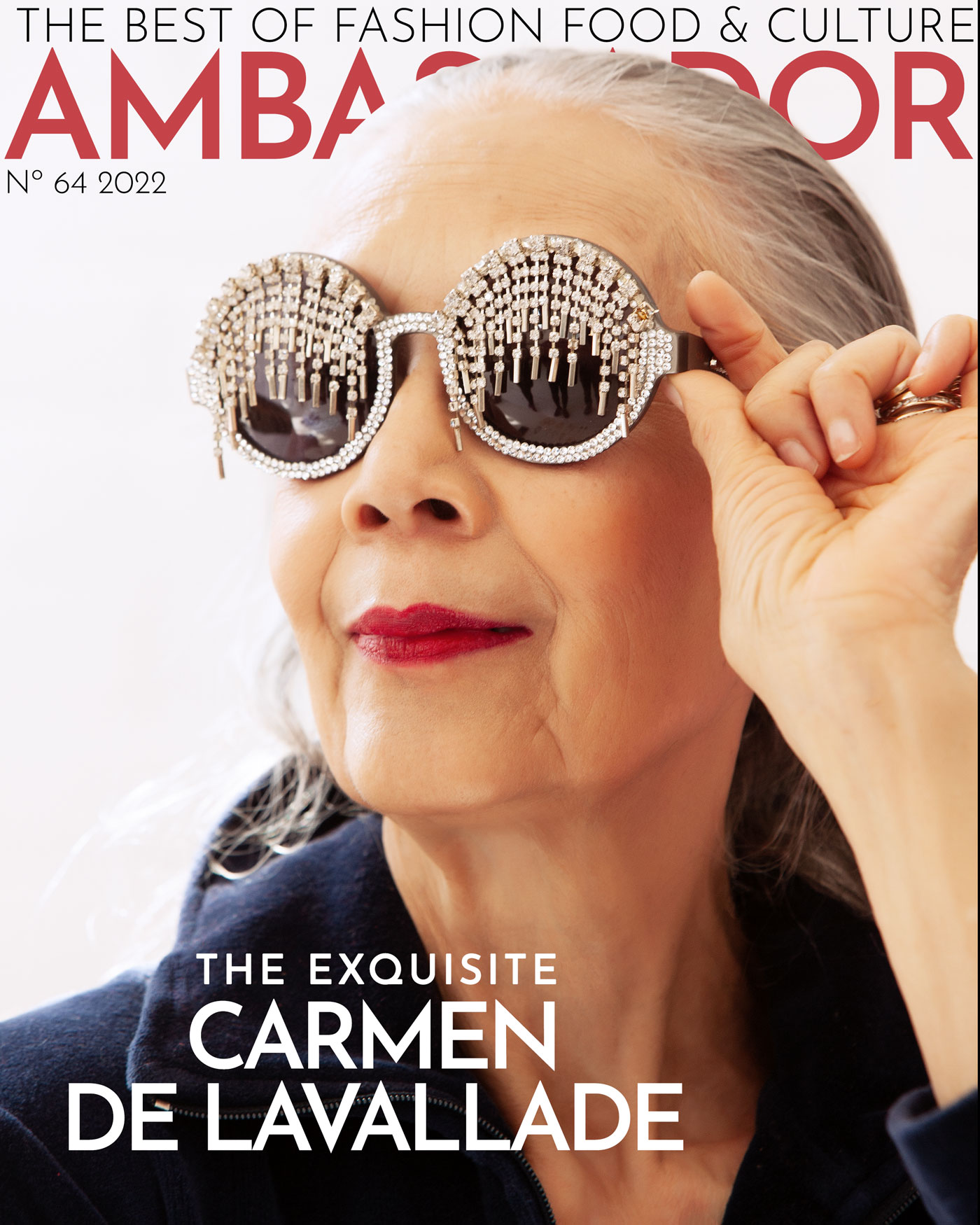 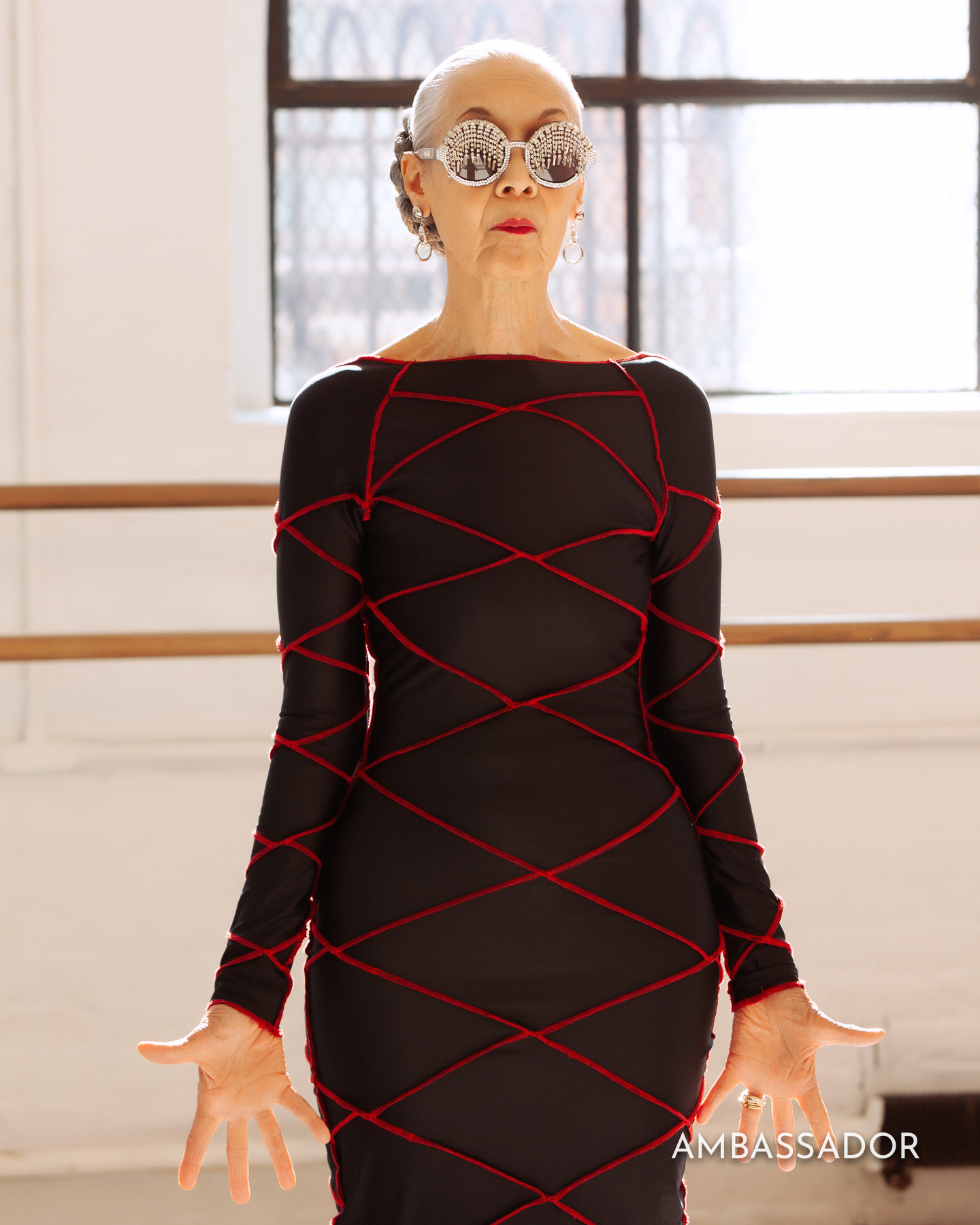 Editor-In-Chief Musa Jackson @iammusajackson has an in depth Q&A with the iconic dancer and choreographer the timeless beauty CARMEN DE LAVALLADE. We conclude Women’s History Month giving a bouquet of flowers to the phenomenal Carmen De Lavallade. A stunning African American female and one of the pioneers of modern dance.

Beginning her decades long career in the middle of the 20th century. Her contemporaries and collaborators included Alvin Ailey, Diahann Carroll, Dorothy Dandridge, Pearl Bailey and her husband Geoffrey Holder. Before long Meryl Streep, Sigourney Weaver and Henry Winkler were among her illustrious students. She has been awarded the Black History Month Award, Rosie Award, Bessie Award, Capezio Dance Award, an honorary doctorate from Juilliard and Kennedy Center Honors. At 91 years of age her legacy leaves and indelible influence on dancers and choreographers from around the world. She is a timeless blueprint of living life on her own terms.

...women at that time got married and gave up their careers. Geoffrey was my champion and let me do what I wanted. He’d make my costumes. We’d do our career together or not together.

MUSA What made you decide to be a dancer?
CARMEN I was inspired by my cousin Janet Collins, the prima ballerina. She was the first from my family to go into the arts, the classical route, which at the time was risqué as there were no black ballerinas; black dancers weren’t allowed to take classes. She eventually partnered with choreographer Talley Beatty, and they started to dance as a nightclub act. They both experienced racism, but never gave up, doing their best to survive.
MUSA What advice did the great prima ballerina Janet Collins give you?
CARMEN Janet was ten years older than me, and as I started working she was very encouraging, although our styles of dancing was very different. I took ballet classes from her teacher Carmelita Maracci, who was a famous dance instructor in L.A. She taught the Spanish style of ballet, which was more delicate than the Russian form of ballet, which was rigid. I preferred this softer style. Janet who worked with Lester Horton, who would become my mentor. She steered me towards Lester and Carmelita
MUSA Lester Horton was so instrumental in your dance career.
CARMEN At the time in 1948, Lester was starting his own dance company, and I got a scholarship. The company was on Melrose. It was two big storefronts, and they performed there on the weekends. It was a small company of eight people, all barefoot. He called his work “choreo-dramas” in those days you told stories. Modern or classical, everyone got political. It was during the McCarthy Era. Lester was quietly political and had no problem with people of color joining the school. He liked me, so I got lots of small parts in his pieces. I ended up in the company class by the end of the second year. In a short period of time things started happening for me. By 1950 I had made my Lester Horton debut. The great beauty Lena Horne came to see me.

In my day you wouldn’t dare mix it up. Now you have hip hop choreographers. It’s fun. Geoffrey told me don’t get stuck in a form.

MUSA How did you meet your late husband the dancer, choreographer, actor Geoffrey Holder?
CARMEN While I was with Lester Horton Dance Company, Lester had a heart attack and passed away. Alvin Ailey came back to the company. Alvin was a part of my Junior High and High School experience. Somehow Alvin became the choreographer. At around that time they were shooting the now iconic film, Otto Preminger’s Carmen Jones. Alvin, James Pruitt and I auditioned and got the gig and did the dance scene Rhythm of the Drum with Diahann Carroll, Pearl Bailey and the great beauty Dorothy Dandridge. Herb was the choreographer. Soon after that Ross took over the Broadway production of House of Flowers from choreographer George Balanchine. Alvin and I joined the cast in Philadelphia with a duet. The others in the cast were not happy about these new people coming in and getting a duet. But that’s where I met Geoffrey. He was in the show already and took us under his wing, and eventually the rest of the cast started to come around. Geoffrey who was also an amazing painter, had an exhibition and took me to see it. Ironically a lot of the paintings looked like me. He said to himself when he met me, “I’m going to marry her”. He was right, six months later we were married.
MUSA How did Alvin Ailey feel about that?
CARMEN He didn’t like it because he also liked me. I think it was because we grew up together and went through a lot together.
MUSA What was it about Geoffrey Holder that made you decide on him?
CARMEN Well, a lot of women at that time got married and gave up their careers. Geoffrey was my champion and let me do what I wanted. He’d make my costumes. We’d do our career together or not together. Even after our son Leo was born and I had to go Southeast Asia for three months. Geoffrey was okay with me going. When Geoffrey was working with Josephine Baker in Paris, we lived there and Leo played with Josephine’s kids. Our life was always diverse, International and supportive.
MUSA Tell me about Yale?
CARMEN I was at Yale Repertory Theater. I was acting and teaching movement to actors. Some of my students included Sigourney Weaver, Henry Winkler and Meryl Streep. Henry was the sweetest. We used to go out to East Hampton and do summer theater there. I actually played his mother. And Meryl was a natural. You saw people grow and go through their different stages. But Meryl was born with it and got all the lead roles. She was just so sweet and she’s still that way. She doesn’t have a star bone in her body. She also sings like a dream. At Yale we all had lead roles. It was a real family. It was a school of doing. You learned it all, from the playwrights, main stage, the costumes, the sets, the lights. No one was standing around. Everyone was participating. It was a great time. By the time most of those students got out there, they had jobs.
MUSA A dancer’s life is so short-lived. How has your career lasted so long?
CARMEN I think that’s because I’m a contemporary dancer, not a ballet dancer. They have to hang it up after a certain time. The thing about contemporary dancers is that they can invent their own movement. They know how to reinvent themselves. It doesn’t bother them, they know how to adapt.
MUSA So did you plan this career then?
CARMEN No, it just fell into my lap. Something would happen and I’d go there. I didn’t plan any of it.

MUSA Well now you have social media impressions. What do you think about social media?
CARMEN I don’t have time for social media. I’m on it but I have someone else who does it for me.
MUSA When Donald Trump was president you received the Kennedy Center Honors Award, but declined the reception at the White House. Can you clear that up for us?
CARMEN Norman Lear started it. He said he wasn’t going to the cocktail party at the White House. Because of you know who; I won’t mention 45 by name. He wanted to get rid of the arts and take away all the funding for them. Well, I was putting up my tribute piece to Billie Holiday and that’s when Charlottesville happened. I saw people talking about the Jews and burning crosses and you know who chimed in and said they were nice people. That was it. I sent that letter joining with Lear and declining the invitation, and it went viral on social media. And then the President said he wasn’t coming. He didn’t want to come anyway. The White House was a “photo op/ cocktail hour” thing with the president that we were skipping. And as much as I love the White House having been on few occasions, those two reality show people crashing the party really took all the fun out of it.
MUSA What do you think about dance and what it will look like in the future?
CARMEN I think it will be contemporary and modern dance blended together. I see everyone taking from each other. In my day you wouldn’t dare mix it up. Now you have hip hop choreographers. It’s fun. Geoffrey told me don’t get stuck in a form. I do like the synchronized dancing and that crumping out of L.A. Crumping is a form of possession. It’s very interesting. That’s why Rise is my favorite movie in the world. Because I grew up in that neighborhood. Compton and stuff. Here’s a group of young people whose lives are horrendous but they take care of each other. Their anger started in the body and came out in movement. They work off each other’s energy. It’s the most remarkable thing.
MUSA Anything you still want to accomplish?
CARMEN Everyone says I should write a book, and I just might! It will be like a dictionary, full of chapters, poetry and ramblings.
Talent: CARMEN DE LAVELLADE
@carmendelavellade
Photographer: @marcbaptistephoto
Producer & Creative director: @iammusajackson
Makeup: @kevinmack42
Hair @stevenricenyc
Stylist @robynvictoriaf
Carmen’s Looks: @xulybetofficial
@rubinchapelle
Sunglasses: @amorirstudio
Shot on location with company dancers from Dance Theater of Harlem.
Special thanks to Anna Glass and Virginia Johnson
Special thanks to @iconicfocus