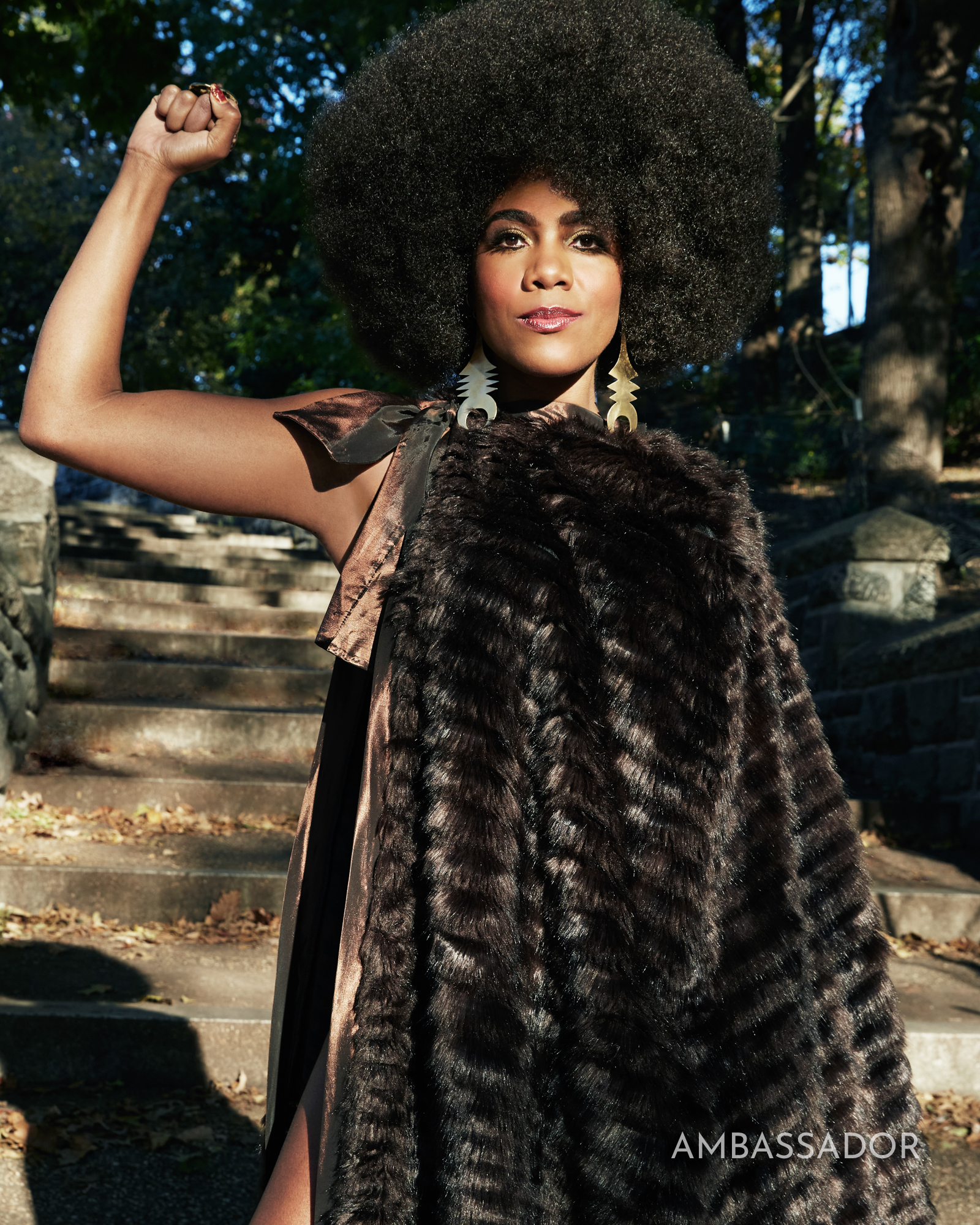 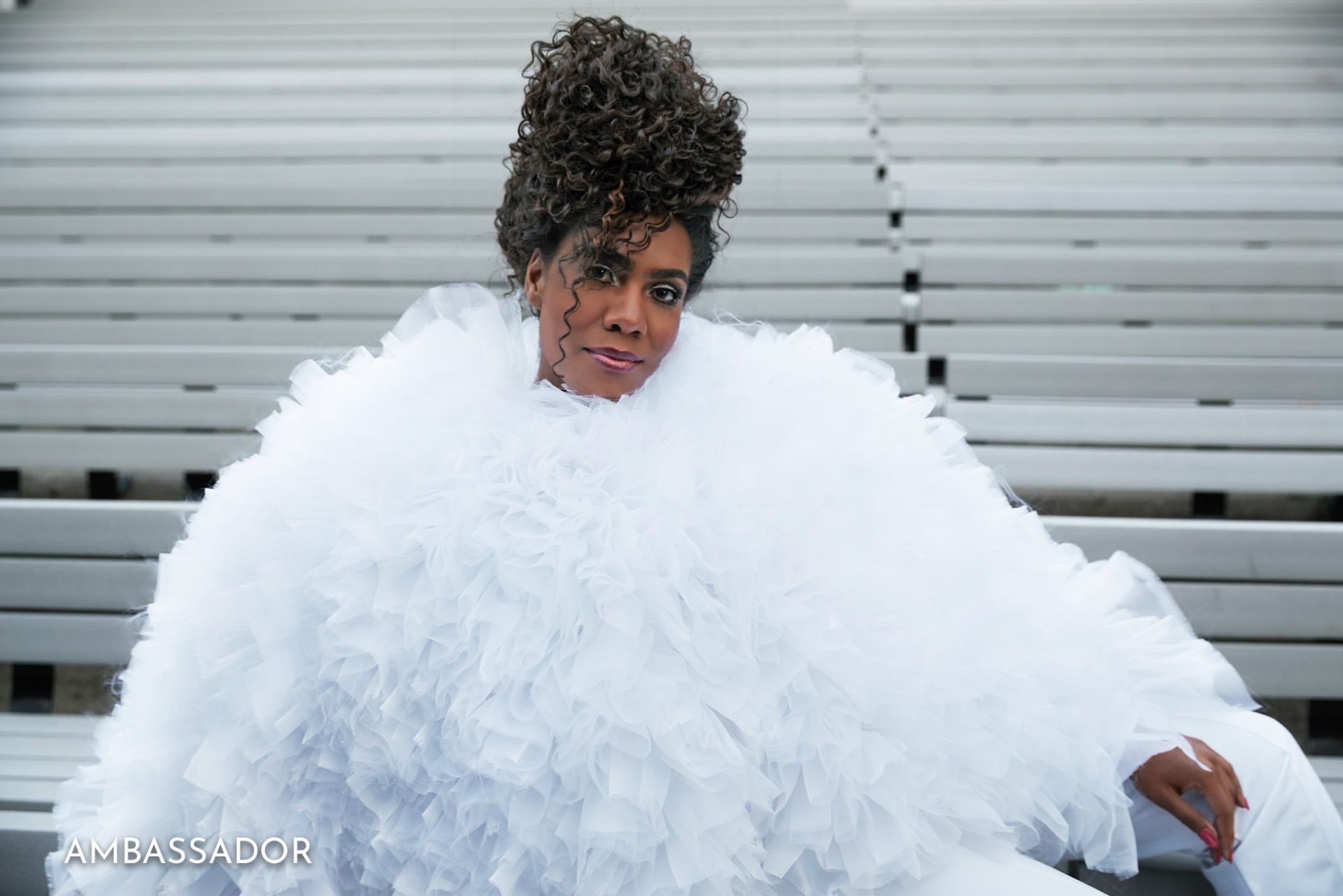 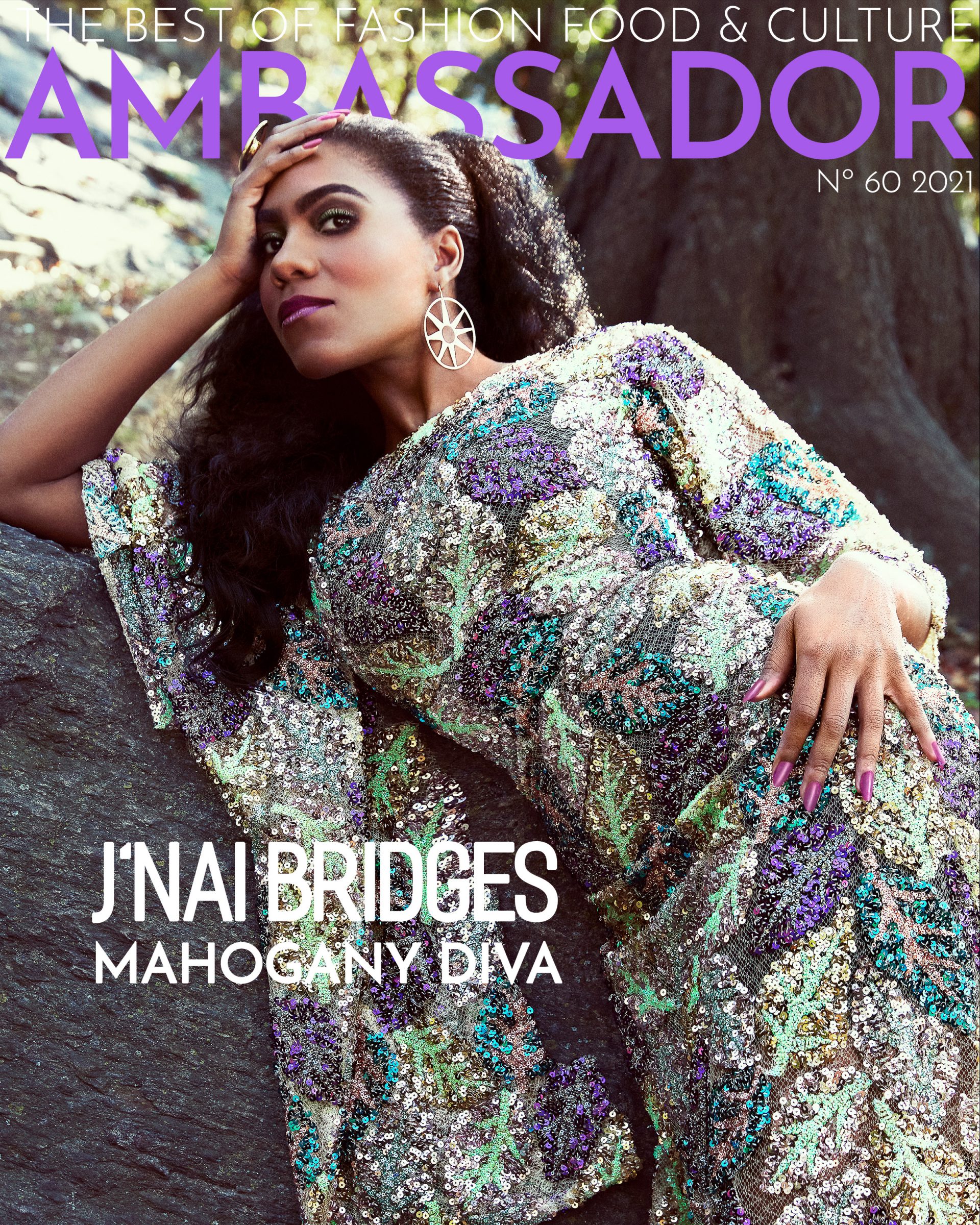 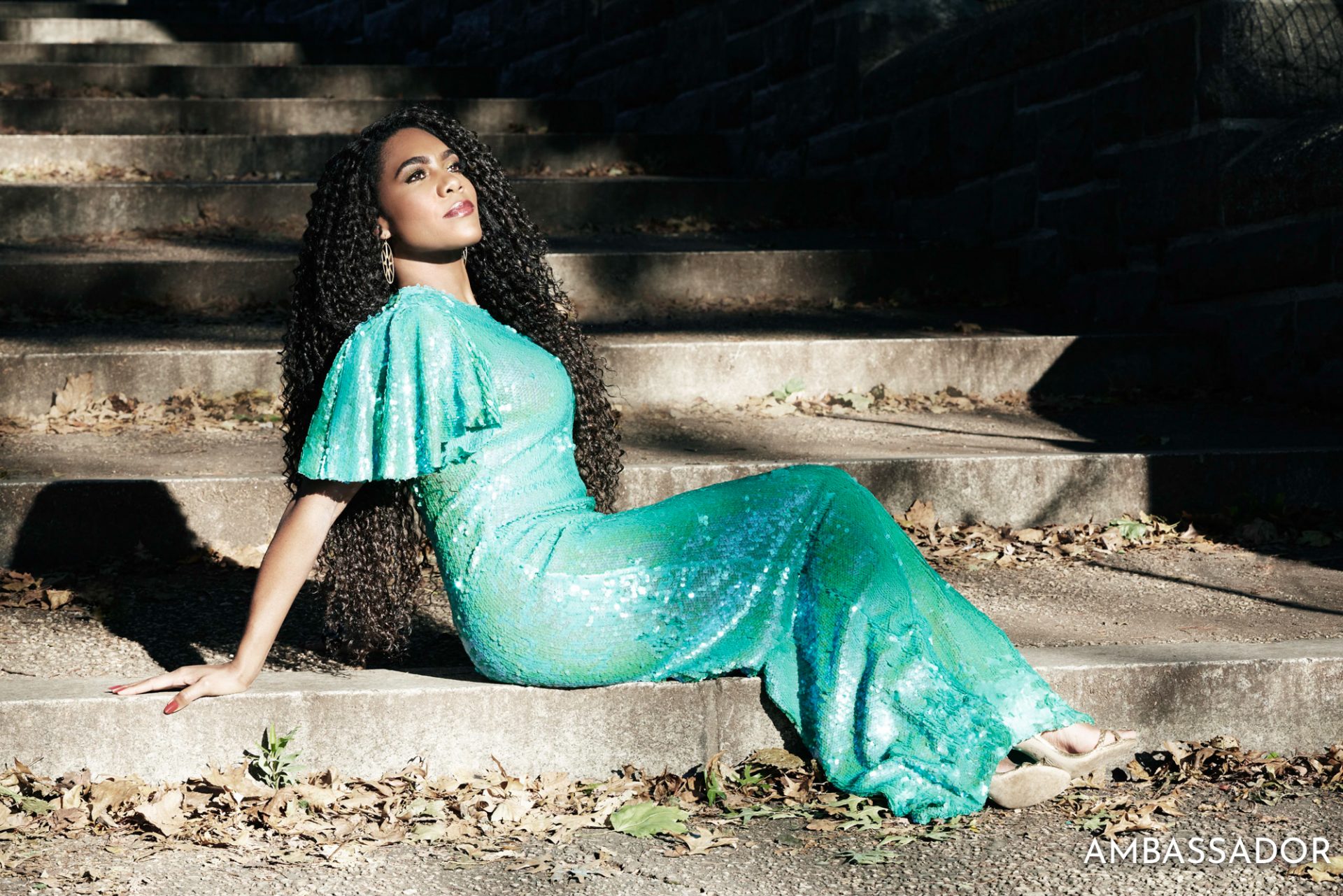 Although the pandemic had a number of setbacks like the cancellation of her scheduled debut in the title role as Carmen at the Metropolitan Opera but it also fueled her activism with her highly successful panel discussion regarding race and inequality in opera with The Los Angeles Opera helping bring needed transformation to the opera landscape. J’Nai using her powerful voice to bring about a modern age opera renaissance.

Opera is such a demanding field. Your voice is always changing. Its like when you hear a baby and an old person their voices are so different. Our voices go through these changes so we have to stay in tune with them at all times. I feel like practicing is actually my job. Performing is my job too but the real work is in the practice room.

MUSA Where are you from?
J'NAI I am from Tacoma, Washington State. Which is 45 minutes from Seattle. Pacific Northwest girl, born and raised.
MUSA Were you always into opera/ classical music as a child?
J'NAI Classical music yes. My parents moved into my first and only home growing up. There was a piano left there by the previous owner. He asked us to store it for a couple of days but came back for it three years later. But I had been banging on that piano all that time. So my mother was like you said you’d be back next week and my daughter loves this piano. So you either pay us for storage or you give it to us. He said fine and let us keep it. So piano was my first instrument and my parents threw me into piano lessons when I was five. So classical piano music was always a part of my life. But opera vocal lessons didn’t come until my senior year in High School. I was in the choir and my teacher thought I had a natural gift. Thought I should hone in on that and take classes. I was crazy busy with basketball but I thought why not. So I started taking private voice lessons and was like this is something I never felt before. It was connection that felt like home. Basketball I was always really good at but this hit different. So I told my parents I wanted to audition for Manhattan School of Music and Oberlin. I had very little training. The requirements back then were you did a pre screening audition cd to be granted a live audition. I made my little songs, one in German, French, Italian and English. I didn’t even know I knew how to sing in these languages. But my ear just grasped onto it. I had an amazing teacher who would play the songs for me and also speak them in the languages. I would just repeat them back and be able to sing them. It was meant to be.
MUSA Who were some of your musical heros / sheroes growing up?
J'NAI Definitely Whitney Houston. For me she still is. I always reference her whenever I’m singing anything it doesn’t even matter the genre. To me she is the ultimate artist. Michael Jackson. When I later realized what he was doing with his voice I was like nobody can emulate that. Just the whole performance and spectacle of his being. We would stand by the big old tv back in the day and watch him. That really formed this idea of excellence in my mind and every move be at the highest level. Stevie Wonder, Aretha Franklin. Then going into classical it was Leontyne Price. She was the greatest.
MUSA How do you prepare for your concerts?
J'NAI It’s like being an athlete you keep training. There are so many parallels between singing opera and sports. Opera is such a demanding field. Your voice is always changing. Its like when you hear a baby and an old person their voices are so different. Our voices go through these changes so we have to stay in tune with them at all times. I feel like practicing is actually my job. Performing is my job too but the real work is in the practice room. Relating it to sports it’s the resilience, the persistence. Learning how to loose. Someone has to loose in a sports game sometimes I might have an off night. I might loose a high note forget a line. You have to make that mistake and quickly get back in line. Learn from it.
MUSA What is it like being a highly successful Black female mezzo soprano opera singer in such a historically white “presenting” occupation?
J'NAI We are here and have always been here. It’s a challenge. I will walk into a room on the first day of rehearsal and being extremely prepared and armored in a way. It transfers to every Black person in whatever they do. And it’s unfortunate because I feel that it takes away from the tenderness of who we really are. So I have to check in with myself almost everyday. It’s really this balance of receiving and being able to give. And not coming off as this angry Black woman. Which is so frustrating but it’s a really difficultly. There are several Opera singers in the past who have been cast out because they spoke their mind. Thankfully we’re in a different time. I have been very outspoken.

...the pandemic was kind of a blessing for me because I needed rest. I needed time to be by myself. I love my life. I travel the world and experience the luxuries of it. It’s not all glitz and glamor. I just can not complain.

MUSA You led a highly successful panel discussion regarding race and inequality in opera with The Los Angeles Opera. Tell us about that?
J'NAI That opera was during the height of the pandemic and right after George Floyd was murdered and they asked me to do a virtual recital. I said absolutely not I could barely speak much less sing but I will use this time to have a discussion or just talk. So I said I want to gather my closest Black friends in the business and just talk. We do this amongst ourselves anyway. I don’t want to speak for everybody so we don’t have to hide and you really know what’s up. So they agreed and it was a very sobering moment. It started this reckoning with the opera world but the whole classical music industry even in Europe. I did interviews with big magazines over there. It was really interesting because we’ve been saying this all along. But now that you were unable to hide from this cold blooded murder caught on video because we were all quarantined. We were forced to watch this murder all nine minutes of it. Yes it scary to have to forum because of a fear of retribution. Nothing like this has ever happened before in our industry. It was always been pushed under the rug. That’s just how things are. We voiced our truth and we were heard. It literally sparked a transformation in our industry. Their are now more Black faces on the stage and behind the scenes in positions of power.

MUSA You have been a featured lead or guest artist for so many operas and opera houses i.e. Los Angeles Opera, National Philharmonic, Washington National Opera, Palm Beach Opera, San Francisco Symphony, Canadian Opera, Houston Symphony and Metropolitan Opera to name a few. What is that like for you?
J'NAI I feel so blessed and lucky. I really hadn’t thought about how incredible my career in life was until I had time to. I’ve just been going and going for like seven years now. But the pandemic was kind of a blessing for me because I needed rest. I needed time to be by myself. I love my life. I travel the world and experience the luxuries of it. It’s not all glitz and glamor. I just can not complain. I love the fact my family is so supportive and I’m able to bring them along for the ride. We just went to the Kennedy Center honors and we are going to go to the Grammy’s. Sometimes I really do feel like I’m dreaming.
MUSA This pandemic has impacted the live event world including opera houses. Your scheduled debut in the title role as Carmen at the Metropolitan Opera was cancelled. How did you pivot from that?
J'NAI It was very difficult. First of all I allowed myself to grieve because it was tough. So many big debuts and important debuts were cancelled. Wiped away in an instant. I allowed myself to grieve and snapped out of it. I’ve always been a fighter and this is not going to dictate my life and trajectory. My voice is me and that’s not going anywhere. I can make music so I got really creative. I was so busy doing virtual projects but then their were companies that flew me out sing for an empty audience because of Covid. Then I collaborated with Converse and then Global Citizen. I really believe in manifestation. That’s what’s going on but this is what I am. I just think the power of positive and intentional thinking is just everything.
MUSA Just last year you won a Grammy award for Passion of Yeshua, was apart of Global Citizen Goal campaign that also featured artists like Usher, Shakira, and Coldplay as well as a selling out Carnegie Hall for your debut. You are a 21st century Black female opera diva pushing boundaries and norms where do you see all of this going?
J'NAI I just see it going and going. One of my biggest wishes, hopes and goals is to look out into the Metropolitan Opera when I’m onstage and see my people, and everybody. I want it to be a part of our every day culture. Opera is amazing. It’s a play with singing, live orchestra and costumes. My goal is to make it accessible to Black people around the world. And to have it be as popular as anything. At the Grammy Award show there should be a opera singer as part of the performance.
MUSA What advice might you give to a young Black girl wanting to pursue an opera career?
J'NAI You have something to offer. Something really great to offer. Nothing can take that away. Unfortunately people are racist. That’s just what it is. But that can not define you. You have to put your blinders on, surround yourself with people you trust and love. Work on your craft. You don’t need a bunch of friends. It’s comes down to this, blinders, work on your craft and believe in yourself. And know that you have something major to offer. Put yourself out there. Sing for everybody. That’s what I do. I sing because I love to sing. Your time will come as long you believe it will.