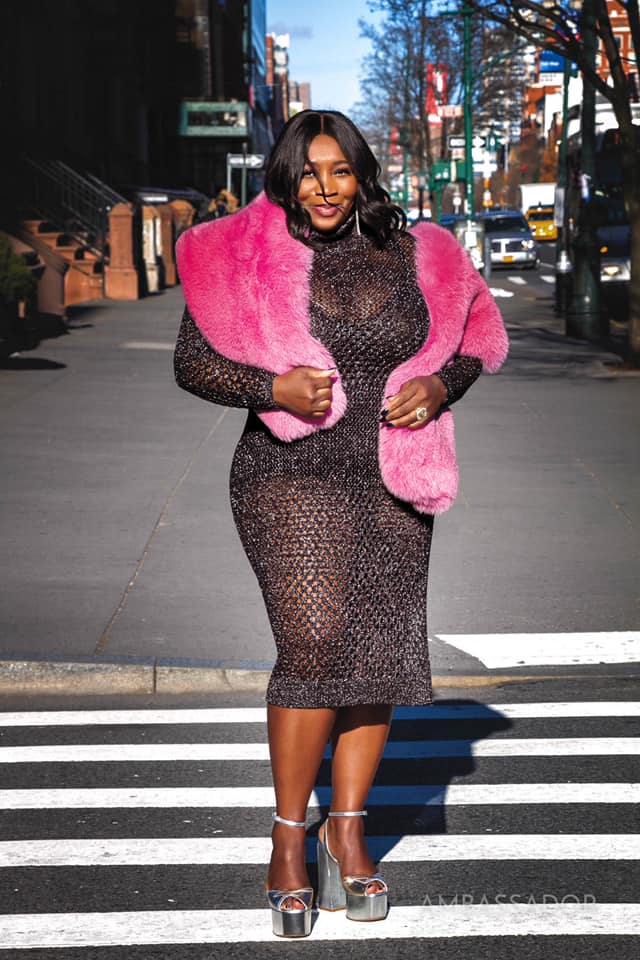 Ambassador Digital Magazine’s Editor-in-Chief Musa Jackson has an in-depth Q & A with the award-winning media personality, host, and author Bevy Smith. Let’s go on her epic journey from Little Brown Bevy to Queen of Harlem.

We begin with her early days Uptown, then tag along for her rise during Hip Hop’s Golden Age when she became a senior director in luxury and fashion advertising and an executive at Vibe and Rolling Stone Magazines.

We’ve been watching her incredible climb as she eventually left those high-profile positions to follow her passions and chart her own destiny. With the A-list Dinners With Bevy, co-hosting the groundbreaking Bravo’s Fashion Queens and the hit Page Six TV and now Bevelations, her runaway best seller and hit talk show on SiriusXM Radio,

MUSA Bevyyyy! It's so good to chat with you, my dear. The first line of business is, we would like to hear in your words what was it like growing up in Harlem for you.
BEVY Growing up in Harlem was a magical place for me. I learned so much just walking the streets of Harlem, knowing that there were avenues named after great Black leaders and icons to going to school with Black teachers. Everyday going into the classroom that was papered with Black history lessons, not just in February, but every single day. Then of course, the fashion flair of Harlem.

Growing up in the ‘70s and ‘80s and seeing people be bold and fabulous in their apparel. The first fashion show I ever attended was on the streets of Harlem. Growing up in Harlem was really a charmed thing even with the scourge of drug addiction that happened when I was a kid, then later on when I became a teenager with the crack epidemic. But, I always felt like we as a people were going to make it. One of my favorite blocks in Harlem is Strivers’ Row. For me, Strivers’ Row, The Flash Inn, Copeland’s, these were places I looked at and I said, “Wow, these are Black folks in my community. These are people and places that represent better.” That’s what Harlem meant to me. It rooted me in Black culture, in my Black ethnicity. I was never ashamed of where I came from. It gave me a sense that I could strive for more. (Continued)

MUSA You’re a woman of style who loves fashion. Who were your style icons coming up?
BEVY My mother first. My original style icon. She always was and still is. She is very well put together... Meticulous! It starts in the home. In my book Bevelations, I explain how my mom would do full on fashion shows in the house. (laughs) My father would be the photographer; this was pre-Instagram. My mother was changing outfits, wigs, the whole thing and have my father take pictures of her. Then it was women in my community. It was the barmaids in the Dunbar Tavern and they were fabulous, the hair, the nails, the shoes, the furs, the jewelry. All of it. And outside of that, in pop culture, it was Lola Falana, Diana Ross, anyone who was a brown skin woman on TV or in the limelight. I gravitated towards them. Seeing dark skin women having the ability to shine in big, public arenas definitely fueled me with lots of confidence and that was in addition to my mother.
MUSA How did you land the position as the senior director in fashion and luxury advertising at Rolling Stone Magazine?
BEVY It came about because they approached me. It wasn’t a big deal for me. They came to me. It was very much, “will you come into the office for an interview.” So I did. We only had one meeting and they offered me the job. While it was a big thing for many people in the culture, I wasn’t impressed, because I didn’t feel like Rolling Stone was more important than Vibe Magazine. As a matter of fact, they were the past and Vibe was the future.
We’ve been watching her incredible climb as she eventually left those high-profile positions to follow her passions and chart her own destiny. With the A-list Dinners With Bevy, co-hosting the groundbreaking Bravo’s Fashion Queens and the hit Page Six TV and now Bevelations, her runaway best seller and hit talk show on SiriusXM Radio,

I didn't feel like
Rolling Stonewas more important than Vibe

MUSA Speaking of the groundbreaking Vibe, you were there during the iconic ‘90s. Tell us about that?
BEVY It was definitely a life changing moment. It was the first time in my career I ever worked with Black people in that capacity. I was used to being the only one in the room or maybe one or two more Black people. At Vibe, the entire operation was fueled by Black people, Black creativity and Black culture; that was a game-changer for me.

Cain Calderón-Leon: The Age of Modernism